I think that teachers should keep teaching Shakespeare. A lot of the time it will help students with their confidence in reading and writing. Sometimes kids won’t understand the words at first but that’s okay. Soon enough they will understand the flow of the way he writes and how he uses the different words in sentences. A lot of his most famous plays are read by high schoolers and that could be one of the reasons they are so popular nowadays. When people read Shakespeare’s works it has them relate to some of the emotions and what the characters feel.

I know that William Shakespeare wrote plays and synopsis’s. There were some tragedies and some comedies. Some of his famous plays are Romeo and Juliet, Much Ado About Nothing, Merchant of Venice, Macbeth, and Hamlet. I was in the play Much Ado About Nothing in September. We only had 28 rehearsals to get lines memorized and blocking done (Which if you don’t know is hard for a Shakespeare play). It was super fun though. We set it in the 1940s and it was probably one of my favorite shows I have done. It was about these people who hate each other but are secretly in love and there is a lot of stuff that happens. I have read part of Merchant of Venice and it was really interesting. I think studying Shakespeare will help us understand what words people used in that time period. The pictures I chose are of a Macbeth book cover or poster and our Much Ado about Nothing costumes.

Self assessing will help you in life by helping you know what you’re doing right and what you’re doing wrong. When you self assess you fix your mistakes and learn from them. If you know you did most things right but one thing wasn’t you will want to fix that one thing to make it better. It helps in your occupation because you know how to do things at work and you can be your own problem solver if something goes wrong. At home it will help you get stuff done easier without complaining. If you realize that your relationship or house needs fixing you can figure that out yourself so people don’t have to tell you what to do all the time. I put a picture of a rubix cube to show a problem being solved. 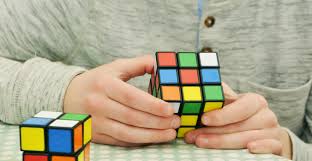