Recently upon, reading about Iran, I discovered a human interest article that piqued my interest. Basically in this article, it explains the difficulty that women have in this country, and furthermore the restrictions that they are faced with. More specifically, this article talks about how women are dressing up as men to get into sporting events, as they are unable to when looking like a woman. One problem that this article addressed is the unfair treatment of women in the country of Iran. Details that support this idea is the talk of punishment from authorities(when attending sporting events), even though it is not deemed illegal by the law to attend these events. It also talks about the threat of imprisonment and other forms of possible serious punishment from the government. Even more, is the contrast they have in support, and opposition. As evidenced by the article, these women, in reality, receive a lot of support, getting asked to be in selfies while attending the games. Yet, evidence in a further article on this topic, shows that a woman participating was caught and eventually jailed, showing how contrasting and polarizing this topic is. Reading this, even though the subject of sports games may indeed be trivial, led me to realize the vast social prejudice against women in Iran and other countries. This appears to be a major problem for Iran, in an ocean of other problems continually surfacing. Although there are many things that can be fixed in this country, the prejudice against women is a major one that seems, to portray a long road to equality.

For my research plan, I am looking at Iran. Iran’s population is around 80 million and its Capitol is Iran, with around 8.4 million people in that city alone. Another major city in Iran is Mashhad. Mashhad is Iran’s second most populous city and has many religious edifices bringing tourism from around the world. The major language spoken in Iran is Persian, and the major religion is Islam. Iran is not considered a very rich country, and as of 2019, it was recorded that 31 percent of the population was below the poverty line. One of the factors for poverty in this country is because of corrupted government. An important date was in, 1979 when their monarchy was overthrown, and the Islamic Republic became their form of government. In general, what I mostly inferred from the article, is that Iran always seems to be in a content state of unrest and war, from governments, other countries intervening, rebellions, and other factors. This article was very informative and helped me have a better understanding of how Iran works in general.

By Kiersten | Uncategorized | No Comments

For my book project, I was able to read the book Caminar. While there were some scenes that I liked, others were perhaps not as exciting. As a result, I felt lukewarm toward the book. The reason for this is that I found myself at least understanding plot points, and finding the plot engaging, though not really being entertaining. Perhaps, the book itself was very good, and my mindset was not in the right place as I read it. An example of this is when I first opened up the book and found that it was written in verse form or poetry. I honestly believe that this format of writing already biased me on how much I would enjoy reading Caminar. Although I was not supremely excited, there were many factors of Caminar that I found enjoyable. Things that I liked in Caminar were the historical accuracy, the plot, and the size of the book.

I really enjoyed,  how much research this author put into this book. Often times, if a historical fiction book, is not historically accurate, this majorly makes me dislike the book. Even though the book is fiction, and I understand that, the historical background, in my opinion, should always be as accurate as possible. So I felt like the author did very well in this field. I also generally enjoyed the plot. Another problem I find that is generally found in historical fiction stories is that the plot seems way too over the top to ever fit realistically within that time period. This book made a plot that was intriguing enough without being out of the realm of being unrealistic in a historic time period. Skila Brown, perhaps, realized the importance, of having the plot feel very real to her readers. The last thing, that I really liked about the book, was the length in general. I feel that many authors try to drag out a story, just for the sake of making it longer. This really makes me annoyed, at how tedious it is, and frankly how much it is used in fiction. Many young adult authors for some reason feel like, they have to have a trilogy for all of their story ideas, and this honestly drives me insane. It really does not make any sense. Most of the young adult trilogies, in my opinion, could be well summed up in two books. The worst example of this is Michael Vey. This series has 8 books, and so much of it was really unnecessary. As a young kid, I had really liked the first book, but then all of the sudden, the author decided it would be a good idea to add 7 more books, with nearly the same plot for every single book, with a list of bland characters getting longer and longer until it drove me insane. Luckily for Caminar, the author decided to be gracious and sum up the entire plot without trying to add anything useless. The book was short, as it should be considering the material and the plot.

Some things that I really did not like about Caminar were the format it was written in and Carlos’s dreams. Honestly, this one is more of personal preference, I really do not think poetry added to the story. In my opinion, I would have gotten equally as much out of the story if it was written in a regular format. The poetry, just made the entire plot more confusing, and some useful details seemed to be left out. The other thing, that I found sort of irritating, was how much dreams Carlos had. In my opinion, having dreams in any book is really cliche. Authors always seem to think, that having dreams, can portray some secret message behind the plot, or foreshadowing. I think that all authors who do this should realize, there are so many different and better ways to do this. Having dreams as part of the plot is used so often, therefore making the effect start to be more tiring than useful. What makes these scenes in Caminar even worse, is that the book is Historical Fiction. With a book trying to portray historical accuracy, having these seemingly random dream scenes is a serious detriment to the plot. I understand, that Skila Brown was probably trying to portray something metaphorically, but honestly, these scenes felt so out of place, that I started to question if the author was having some sort of weird mental breakdown while she was writing those. I found the dreams to be very strange, and also the fact there was more than one dream really did not help anything at all.

Despite Caminar’s, flaws, I was also able to connect with the book on an emotional level. Something that I found to be really sad, was how Carlos’s family had been killed, especially his mother. Even worse, was how Carlos could hear the death of all of his loved ones, and when I thought about it, I realized how I would feel if I were to be put in that situation. Another emotion that I connected with while reading Caminar, was anger. Towards the beginning of the novel, Carlos meets with the soldiers, as they are introduced in the novel. They put on a face to seem trustworthy, but in reality, they just end up stabbing Carlos in the back. Instead of being the trustworthy angles they tell everyone they are at the start of the book, they really had the gall to kill Carlos’s whole village. The facade that they put on, made me emotionally connect to the anger that the author was perhaps trying to get her audiences to feel. The particular line that describes the moment that the soldiers are trying to kill Carlos’s village, is almost horrific and has stuck with me. Though I cannot particularly remember the line, it went something like this. “Pop. Pop. Pop.” It was describing the explosive bombs that killed all of Carlos’s loved ones.

With all of this action, and the bombs, and the suffering, I feel like I really got a better understanding of this location in the world at this time period. The thing, that I really came to understand was poverty, and the almost inability to effectively fight back. I really understood, how Carlos and the other rebels were basically powerless in the long run compared to the soldiers. Now that I have finished things up, I honestly felt, that even though it was not perfect, the story was generally good. Using this knowledge, I can honestly say that I recommend it to anyone who has a liking to historical fiction, enjoys verse form, or would simply like to enjoy a quick read. 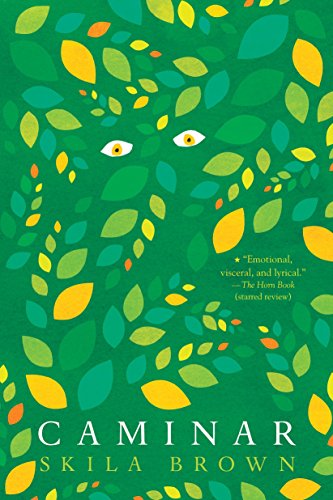 By Kiersten | Uncategorized | No Comments

Right now, I have fully completed the novel Caminar. Basically this novel follows the story of Carlos as his village is conflicted with the presence of Communists. Throughout the book, there is the theme of Carlos trying to become a man, and his journey trying to save the people that he loves. There are many examples of evidence of this because of the way the story builds how Carlos constantly talks to himself wanting to be a man. Throughout the book, many scenes and conversations exemplify his seeming quest. The author so far seemed to really be able to accomplish the feeling as well as the accuracy of the time period and location.  Skila Brown went to Vermont with a degree in the arts, later she spent some time in Guatemala. Perhaps this derives the inspiration for the book as she has experience in this part of the world. Regardless, her book is well written and seems to portray with accuracy the message she was trying to convey.

Currently in the book, I am finished with the entire novel.  Throughout the book there are many themes and messages portrayed. One of the biggest themes is the idea of Carlos becoming a man. Throughout the text their are evidences of this, such as other characters telling Carlos that he should defend his people, as well as Carlos internal struggle to save his people. The audience can tell this because of the different events circulating around his life and Carlos’s ultimate reaction to it.  The scenes that we had in our podcast includes,  the beginning  scene with the rebels, and other scenes leading up to the climax, and the climax itself. This book highlights the history of a raid on communism.