I was here has a lot of issues one being teen suicide but that’s not the only major issue talked about in the book. It also has social media problems and how what people say can affect you. In the book the girls friend is trying to find out why she did what she did and found out that she was talking to a guy who was telling her that it was okay if she killed herself and that her family should understand and that it would make the pain go away. I like the book and how it talks about real issues. I never read anything like this but I’m excited to see how it will end.

I’m going to be doing The mortal instruments. I find these kind of books interesting and fun to read. It’s about this girl who finds out that all the leggings are true. There are angles and demons. She’s apart of this group called shadow hunters they are half angle half human and they protect the humans from the demons. I would recommend this book to anyone that likes a book full of action and romance.

The moment Steelheart knew he wasn’t meant for greatness but for evil and power was the night he first knew he could be vulnerable. It was late the night it happened with clouds full of gloom. The blackness of the night filled the streets and the windows of all the stores. He could hear the cry’s of the people in a far off building he followed the sounds until he was staring at the sign of the bank. He entered not knowing what was to happen next. He opened the doors of the bank reviling the people sitting on the floor he looked up to see an epic standing there. He ran over to to him about ready to stop him when he heard this voice from behind him. “You’re that epic aren’t you?” Steelheart turned around to see this man standing only a foot away.

Steelheart didn’t know what to make of this strange man looking up at him from a distance no one has ever talked to him directly before people were always to afraid to approach him so when this man said this it took him by surprise. He stood not knowing what to say so he said nothing at all the mans face turned form hope to confusion. He looked at steelheart with a puzzled look on his face waiting for him to say anything. Steelheart turned back to the other epic and said ” this is my city” as he said this the doors flew open and swat can barreling in guns pointed directly at the epics. Steelheart didn’t move a muscle he stood staring at the officers while the other epic cowered behind him.

As they were watching the officers a gun shot ran through out the bank followed by the sound of the other epic hitting the ground. Steelheart turned to see the man who had approached him only seconds ago had shot the epic grazing Steelhearts face. Silence came over the bank as everyone looked at the blood running down Steelhearts cheek. The man then began to apologize saying “I’m sorry I wasn’t trying to hit you I swear.”

Steelheart was in disbleife when he felt his blood run down the side of his face. He has never been hurt before so when he realized that he wasn’t as invincible as he once though. He was distraught and caught off guard he knew that once this information got out that people would see him as weak. He looked around to the people and saw himself in their eyes. he watched the blood run down and drip off the side of his face. All he could see was weakness and he knew the people saw that too.

Steelheart knew that the only this he could do now was to get rid of all the evidence so he looked up staring at the man in front of him looking deep into his eyes he then started to kill the people one by one as they screamed pleading with him to spear their lives. He shot out a ball of energy at the man standing there . Steelheart then walked up to the man who was now laying on the ground. He picked up the gun out of the mans hand pointed it at him and fired. This night was the night Steelheart learned to in order to be respected he had to strike fear in the people around him. He also learned that he enjoyed the feeing’s and the power he felt when he took peoples lives. 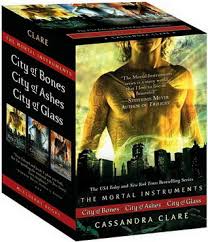 I’m going to be doing the mortal Instruments. I chose this book because my sister has read all of them and she told me that they are really good.

I have started the first one and I plan on being done with it at the end of March. I plan on finishing each book in a month so I will start the second one in April. I read every night before bed to calm down my mind.

The theme we picked was power. Steelheart believes that in order to be respected and be a powerful figure you need to strike fear into people. he thinks that when people fear hi they wound find him weak and vulnerable.  He killed all those people that day in the bank because he showed weakness by bleeding. he feared that when people saw it they wouldn’t think of himself as powerful so he made it so that no one knew and could talk about it.

I’m not a big reader but I do really enjoy reading horror books.

I first started reading when I was in preschool

When I was younger I loved the books dick and jane, then I moved to the boxcar children. as I got older I started to get more into horror like Stephen King’s books.

I read in my bed at night before I go to bed to help me sleep. I read horror and romance.

I like to focus on just one at a time if I read more than that I get distracted and I forget what’s happening.