I have finished the book, Between Shades of Gray, so heres what has happened in the rest of the book.   After staying in the camp for months almost a year half of the people get taken to a different camp, but instead of staying in a shack they build they own place to live out of tree branches.  At this point more people are getting sick and dying.  Lina’s brother got sick, but soon got better.   One of the hardest things Lina experienced was her moms death.  Surviving there was really hard fore her and her brother, but they pushed through it.  In the epilogue it talks about how Lina & her brother stayed there for twelve years before going back home.

All the people in my group’s theme, we stated in the podcast was how they were treated poorly by the soviets and how their eperience at the camps were terrible and hard.  Some scenes we chose were when the first got to the camp, how they were fed poorly and how they were beaten.  We chose these scenes to show how difficult their struggles were and it is important because it shows how people back in the day struggled with these camps.

The event of history that took place in the book is the time period during hitler and the soviet concentation camps during the 1932.  These camps held 2,000-10,000 people who we prisonors or innocent.  In these camps they would labour as many as 14 hours per day.  Joseph Stalin was the leader at this time and put them through hardship. 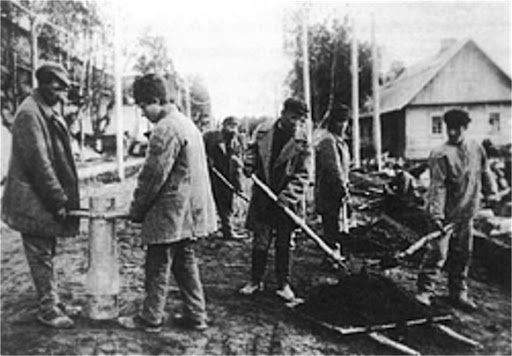 One thought on “Book Club Response 2”