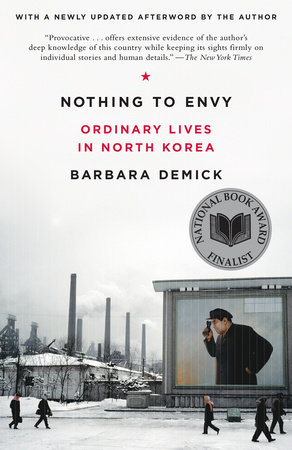 A couple months ago, I read Nothing to Envy: Ordinary Lives in North Korea by Barbara Demick. I wasn’t expecting it to be so good, but it completely surpassed my expectations!

Barbara Demick is a journalist for the Los Angeles Times who moved to Seoul to cover the Korean Peninsula. After travelling to North Korea, she realized she could barely get any information that way; the government was too careful to keep the truth from foreigners. So instead, she talked to hundreds of defectors living in South Korea, writing the book based on the real experiences of six North Korean defectors. The story has a strong focus on the famine of the mid 90’s.

One of the main characters is Mi-ran, a young girl who falls in love with a boy named Jun-sang, and the book follows their forbidden love story, sneaking around at night so they wouldn’t be caught together. There’s also Mrs. Song, an incredibly patriotic mother who loved her homeland, but as the famine hit and she could no longer feed her family, she began to come to the painful truth that her country that she loved so much wasn’t as amazing as she always thought. It also follows the story of her daughter, Oak-hee, a rebellious girl who was never fond of the regime. Next, Dr. Kim looked after children in a hospital and she watched countless children die of starvation, knowing she couldn’t do anything to help. Then there’s Kim Hyuck, a “wandering swallow.” He was just a boy when the famine hit and he was left to fend for himself on the streets. All of these characters are real people who actually went through everything shown in the book.

The book was incredibly sad at times. You read about all these characters and then watch as their loved ones die. They have to fight for their lives to escape from the North Korean regime. However, it was also very interesting and informative. I learned so much about North Korea and the lives of those who live there from reading the book. Also, about halfway through when it starts telling the stories of how they defected, it becomes exciting. Watching them fight so hard and finally escape is thrilling. I really enjoyed reading Nothing to Envy.