I believe every day explores LGBT issues such as gender identity and how we can’t all fit into one box – more specifically, what it means to be genderless or genderfluid. The book places an emphasis on being accepting and not judgmental. Throughout the book, the main character, A, switches bodies, inhabiting all sorts of people, from girls to boys to anything in between, always accepting whatever body they’re placed in, and it shows how there’s nothing wrong with people who feel some sort of fluidity to their gender identity.

LGBT people and issues have existed for a long, probably all of time, but it’s only recently that these people have started fighting for their rights. In 1952, Virginia Prince, a male crossdresser, started what many people believe to be the first transgender rights movement in America (genderfluidity falls under the broader category of transgender, or those whose gender identity is different from the sex they were assigned at birth). Now, there are many people fighting for equality for trans people. A couple organizations include GATE and The World Professional Association for Transgender Health, which both advocate for human rights and justice.

The book hasn’t explicitly talked about these issues so far, but it does bring up the topic and make you think about it. Does it matter what gender someone identifies as? Should that influence what others think of them? Is it wrong to have preferences of gender when you’re interested in someone? These are some questions that the book raises. It also explores sexuality in the main love interest – is it wrong for her to not be attracted to A when they’re inhabiting a girl? Should she just be more accepting? I think it’s interesting so far, though the main character falls in love awfully quickly. I’m interested to see where the story goes with this. 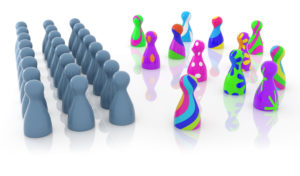